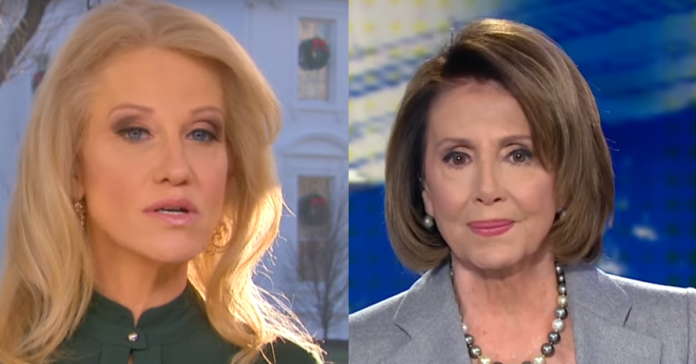 Kellyanne Conway is good. She is smart and very quick on her feet. She is also funny, real, engaging, and willing to joke around.

She is also the only woman in American history to manage a presidential campaign. She is a working mom…the left should love her but they do not.

Trump was pissed and Nancy got snippy so Kellyanne jumped in and wiped the smirk right off her face. From The Washington Examiner:

“I knew he was looking for a way out,” Pelosi, D-Calif., said when Trump left the room after only three minutes, according to the New York Times. “We were expecting this.”

Conway, who was in the room, replied: “Respectfully, Madam Speaker, do you have a direct response to the president?”

The Times reports Pelosi said she was responding to the president and not his staff.

After leaving the meeting, which also included Senate Minority Leader Chuck Schumer, D-N.Y., Trump addressed reporters in the Rose Garden and said he was particularly upset about Pelosi suggesting he engaged in a cover-up during special counsel Robert Mueller’s Russia investigation.

From The Hill: President Trump cut off infrastructure talks with congressional Democratic leaders and lit into them during an appearance at the White House Rose Garden after Speaker Nancy Pelosi (D-Calif.) said he was  “engaged in a cover up.”

“I don’t do cover ups,” Trump said in his remarks, shortly after leaving the meeting with Pelosi and Senate Minority Leader Charles Schumer (D-N.Y.).

Trump spoke at a lectern with a placard attached to it reading “ No Collusion No Obstruction” with statistics attacking special counsel Robert Mueller’s Russia investigation.

He also said he had been annoyed to learn that the scheduled meeting on infrastructure would take place after a House Democratic caucus meeting expected to focus on his possible impeachment.

He said he told the top Democrats to “get these phony investigations over with” before talks could resume.

“I’ve said from the beginning you can’t go down two tracks,” he said.

The president blasted the probe as a “total hoax” that “hurt us in so many ways.”

From Axios: President Trump told reporters at an impromptu press conference on Wednesday that he will not negotiate with Democrats in Congress on an infrastructure package or other bipartisan policy proposals until they call off their investigations.

“Instead of walking in happily into a meeting, I walk into, look at people that have just said that I was doing a cover-up. I don’t do cover-ups. … I walked into the room and I told Sen. Schumer and Speaker Pelosi that I want to do infrastructure…but I can’t do it under these circumstances.”