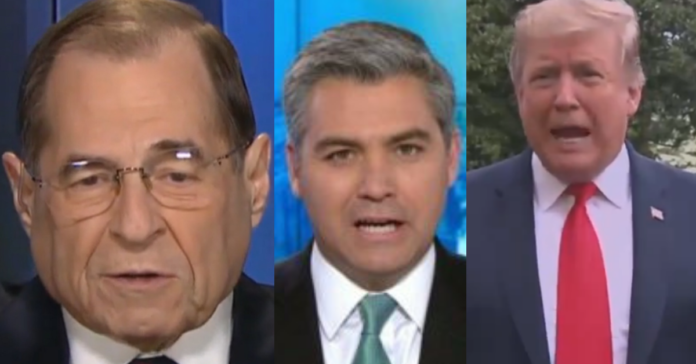 It was always just a conspiracy cooked up by the Dems and pushed by the media to damage Trump. From The Federalist Papers:

New York Rep. Jerry Nadler, the man at the helm of the cabal that is attacking President Donald Trump, has a major issue on his hands.

It has been discovered that his son, Michael Nadler, works for Gibson Dunn & Crutcher LLP, a New York based law firm.

What is significant about this job is that that office has repeatedly sued President Trump, including on behalf of CNN reporter Jim Acosta, Big League Politics reported.

“His son (Michael Nadler) got a job with Gibson Dunn & Crutcher LLP in 2018. That’s convenient because Jerry Nadler and the Democrats just won control of the House in 2018.

Now the Nadler family will gain access to thousands of Trump documents via Jerry’s subpoenas!,” our insider stated.

Gibson Dunn represented CNN’s Jim Acosta in his lawsuit against the Trump White House after President Trump revoked Jim Acosta’s press credentials for creating a disturbance in a press briefing and making physical contact with a female White House intern.

In December Gibson Dunn announced that it was representing the Center for Reproductive Rights in its lawsuit against the Trump State Department concerning abortion language in Trump administration human rights reports.

Such an arrangement — Jerry Nadler investigating Trump with his son’s firm trying to get access to documents in other cases — violates ethics rules for federal investigators.