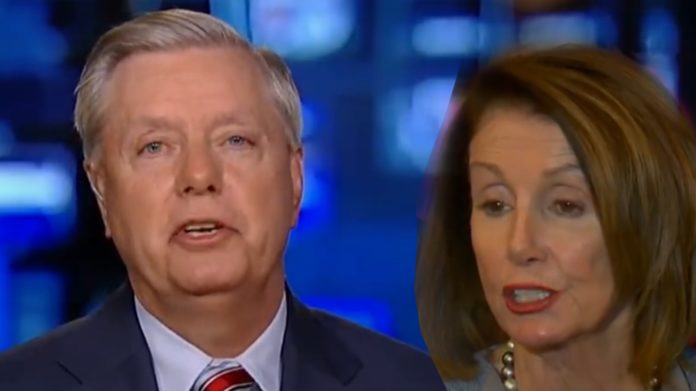 Lindsey Grahm just blew the whistle on a massive scam the Democrats have been playing on this country.

Look, immigration is a strength of America, always has been and always will be. But it is a privilege, not a right.

We must have control over our borders and who we choose to give the amazing privilege of being an American citizen to.

Remember, we allow anyone born here to be a citizen, unlike many countries, which complicates our system as it offers huge incentives to come here illegally.

With no real way to fix that after the fact, it is imperative that we have solid control over our borders and our immigration system.

From Hannity.com: Sen. Lindsey Graham weighed-in Thursday on the national emergency taking place along the United States’ southern border with Mexico; confirming that 92% of family members “detained” since September “fail to appear” at their deportation hearings.

“Just met with Acting @ICEgov Director Ron Vitiello. * If March numbers hold, we are on track for 1.2 million illegal immigrants coming into the country in 2019. * Since September 2018, 92% of the 6,000 family members detained fail to appear at their deportation hearing,” posted Graham on social media.

* If March numbers hold, we are on track for 1.2 million illegal immigrants coming into the country in 2019.

* Since September 2018, 92% of the 6,000 family members detained fail to appear at their deportation hearing.

The United States is projected to add about 1.5 million illegal aliens to the American population by the end of the year, should current rates of Catch and Release, border crossings, and visa overstays pan out.

Additionally, Princeton Policy Advisors researcher Steven Kopits projects that in 2019, there will be up to 500,000 illegal aliens at the southern border who successfully cross into the U.S. undetected by Border Patrol agents. These are foreign nationals whom federal immigration officials are unaware of and are usually only deported after they commit a crime in the U.S.

Also, should visa overstay levels continue at the same pace as in Fiscal Year 2017, there could potentially be about 630,000 illegal aliens added to the U.S. population after overstaying their visas.

Center for Immigration Studies Director of Policy Jessica Vaughan told Breitbart News that experts predict there to be anywhere between 300,000 to 400,000 visa overstays this year.

These projections put the number of illegal aliens added to the U.S. population at around one to 1.5 million, on top of the 11 to 22 million illegal aliens who are already living across the country. This finding does not factor in the illegal aliens who will be deported, die over the next year, or leave the U.S. of their own will. As DHS data has revealed, once border crossers and illegal aliens are released into the country, the overwhelming majority are never deported.