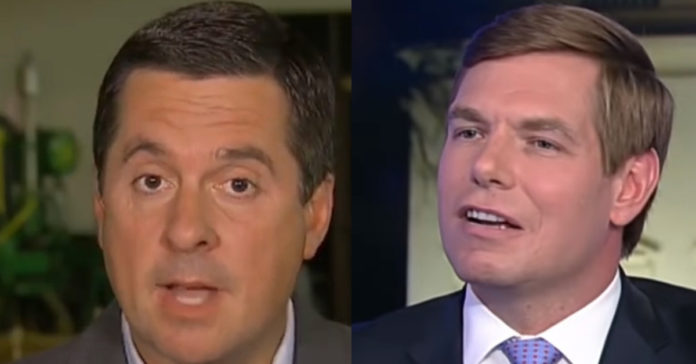 There are all kinds of stupid people in America but by far the dumbest are the Russian conspiracy theorists who are still at it.

After two years, with Mueller turning over every rock in sight and some on Mars, there was zero evidence brought forth that showed Trump colluded with Russia.

That should be good news for the country and we should have all move on and decided to try to work together rather than tear each other apart.

Not with the Democrats and certainly not with Eric Swalwell. Eric went on Fox News and actually tried to keep the conspiracy alive. Enter Devin Nunes who quickly put him in his place.

After a Tuesday night appearance on “The Story with Martha MacCallum,” during which Swalwell seemingly clung to every aspect of the Russia collusion conspiracy theory, Nunes came on and was asked by the Fox News host if he had “any response” to Swalwell’s contentions.

“No, I actually think you should just give him the entire show because the American people will see what they voted for,” Nunes said before comparing the search for a “Russian ghost somewhere” with “trying to find a chupacabra,” a mythical animal.

“They are like a bunch of chupacabra hunters,” he continued. “They have never seen it. They’ve never had any evidence.

The truth of the matter is the people who colluded with the Russians were the Democrats. The Democrats paid Christopher Steele, a former British spy, to get dirt on Trump from Russia. That is just a fact.”

The California Republican said the “best thing” that could happen would be a “criminal referral” that would include “people who lied to Congress, perjury, conspiracy.”